When destiny has planned something for you, nothing and no amount of effort can change it. And this is exactly what we can ‘quote’ about Jay Randhawa’s recently released movie Shooter. It was made, leaked, banned, postponed, stated controversial and what not happened with it, but it’s finally in the theaters and garnering positive reactions from the fans. And something is loved by the audience, we cannot stay back at not talking about it.

Starting with the overview of the movie, Shooter is the story of a very smart and brilliant boy Sucha, who in the search of fame and popularity becomes a goon. No matter he fights for the right but a goon remains a goon. And the story is geared with Sucha himself doesn’t realizes but slowly transforms into a gangster. Yes, the movie is violent with too much bloodshed, gunshots and thrill, but all this is not only what this movie plans to serve. From heart-winning moments of friendship, emotions and love, it has a small yet beautiful love story as well.

Starting with the most prominent and lead character Sucha played by Jay Randhawa, we cannot compromise with appreciating what this guy has done. He has put his heart and soul in the movie and this can be easily seen when he’s on-screen. He struggled to lose multiple kilos, and went through hours of makeup every day of shoot to make sure he looks the most acceptable as Sucha. And this is not all, the way he played the character was next level. From his body language, to expressions and dialogues, everything was at par excellence and this is one of the most prominent points that makes this movie a must-watch. Because we can imagine how difficult it’d have been to play and sustain the character of a gangster like Sucha on screen.

Apart from Jay, there are many other actors like Swaalina, Vadda Grewal, Shubh Sandhu, Rabbi Kandola, Sanjeev Atri and more who played amazing supporting characters and were equally perfect in performing their tasks on camera. While Swaalina had a small role and so was her screen presence, she marked her place well as the on-screen love interest of Jay Randhawa. 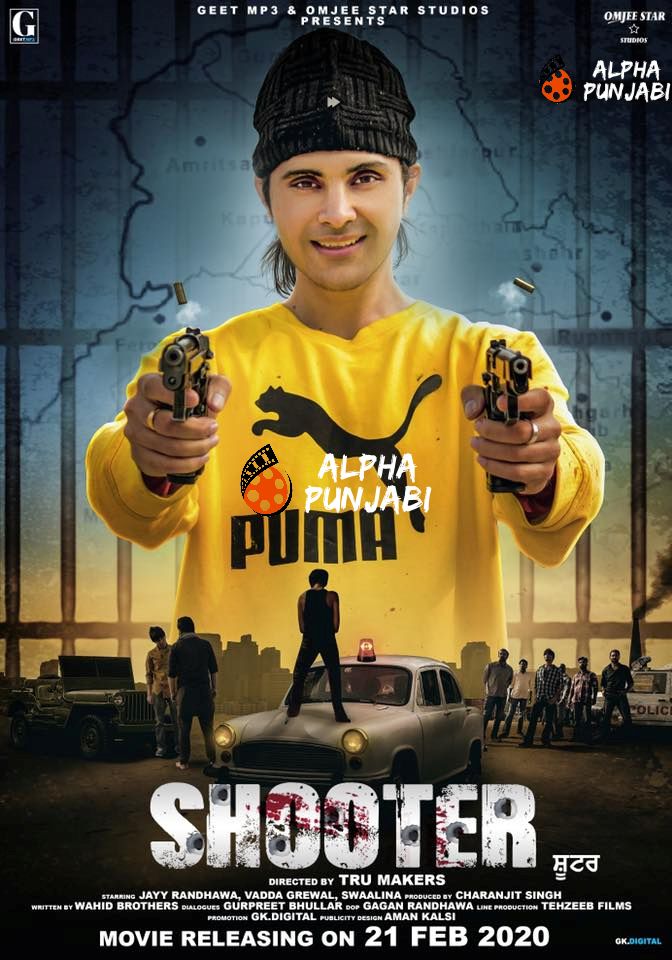 Now moving to the story and screenplay of the movie, we are extremely fascinated with the fact that Shooter is not just like every second crime & action drama made in Punjabi Industry. In fact, it has been directed with utmost brilliancy by both the directors; Dilsher Singh & Khushpal Singh. They have made sure that no string is left loose and took care of everything the audience desires to be served. The film’s team ensured that Sucha connects with the audience and this is what made Sucha unlike other gangsters. No doubt he was a gangster, but in this story, he was the protagonist. The fact that he was emotional and murdered only the antagonists makes him the hero for us.

But if we keep our focus specific to what Sucha’s story tried to depict, we need to mention how he always wishes to be the talk of the town and rule like a king. He was the friend with biggest heart for the friends, and the most heartless enemy for the enemies. The character description of Sucha can go on and on but it will vary for person to person. Hence, we will only suggest to meet him, watch him, know him in the theaters and then decide for yourself.

The only thing that keeps this movie away from a 5 star is the audience’s urge to know more about Sucha’s family and his past story. The scenes where his mom was talked about were important and made us wish for more. Even though Sucha was the lead character of the movie, his past and family weren’t given much and proper screen space. But since Shooter ended with the note that will be continued, we can expect more details in its sequel.

But overall, we consider this movie a must-watch without a second thought. If you are a person who loves crime drama, this movie is for you, and if you are somehow who believes violent movies lack gripping, this movie can turn out to be a game-changer for you.