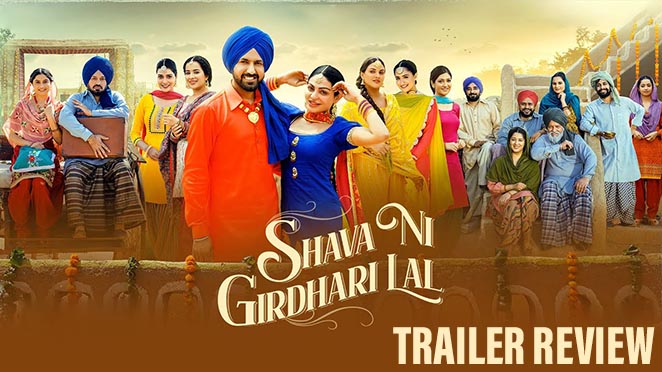 As 2021 moves into its closing days, the industry is left with just 1 month to make this year a memorable one. We didn’t see a lot of movies releasing this year, owing to the fact that the theatres remained closed for most of the year. Now finally, we are able to enjoy a whole lot of movies and Gippy Grewal’s Shava Ni Girdhari Lal is the next one out of the list. The official trailer for the movie, set to be released on 17 December 2021, is finally out!

First of all, do not count how many actors did you see in that trailer, you just cannot! The trailer is filled with glamour! There are beautiful actresses coming on the screen, one after the other. Girdhari Lal (Gippy Grewal) is a desperate single, dreaming of marrying a woman, that’s it, a woman! His desperation has taken him to the point where every woman, single or married, feels like the most beautiful woman on the planet.

For most of the trailer, we get to see the desperation of Girdhari Lal, and when we are not seeing that, we are shown a whole lot of glamorous actresses. Neeru Bajwa, Himanshi Khurana, Sara Gurpal, Tanu Grewal, Paayal Rajput and even Bollywood actress Yami Gautam! It is hard to recall a Punjabi movie with so many actresses in it. Gurpreet Ghuggi, Prince Kanwaljit, Sardar Sohi, Seema Kaushal, Karamjit Anmol and others are playing the supporting roles in the film.

Shava Ni Girdhari Lal has a lot of expectations attached to its name. The movie has been very hyped up and as the release date closes in, the audience is becoming more and more excited about it. While the trailer clears a bit of the movie plot and introduces all the actors but it has been unable to live upto the hype.

The trailer is a sneak peek into what we can expect from the movie and a lot of audience makes up their mind to watch a movie on the basis of its trailer, but in the case of Shava Ni Girdhari Lal, it has failed to attract the audience’s attention. The trailer hasn’t presented the story insight to the least. It is engaging, but is it appealing? However, a 3 minute video cannot describe a 3 hour cinematic brilliance. We hope that the movie will be able to meet or even exceed our expectations.